Tips On Getting Photos Published 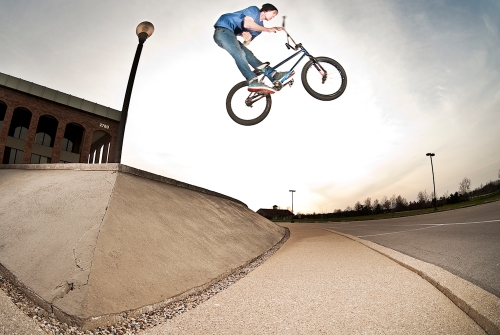 I’ve been dealing with magazine editors for a few years now, and in that time period I have noticed it has become increasingly easier for me to get photos published due to all the advice I’ve learned from them. However, in the beginning I would wait for weeks and sometimes months to get a response from someone. I usually got a response like, “We’ll pass on these photos”. I was lucky if I would get a response. With that being said, here are some of my tips for bettering your chances of landing your blood, sweat, and tears into the magazine world:

Get your name out there:
For a year straight I sent every photo I had to Fat Tony at RideBMX. He was kind enough to post my photos in an online gallery every month and this got my foot in the door. Soon after that, Ryan Fudger emailed me and told me that he liked what I was posting up in the galleries. He then asked me if I wanted to do a reader photo for the magazine (I know it’s nothing big but I had only been shooting for 6 months so I was pumped). Fat also noticed I was busting my ass, so he offered me an internship on the website as a blogger.

Try multiple sources:
Don’t try one magazine. Try all of the media outlets. If RideBMX turns you down don’t give up there. If you really think you have gold sell it for what it’s worth. Try every magazine out there. The thing is some magazines have different standards, and while one may think it sucks the other may think it’s awesome. You never know until you try, and when you try it puts your name out there at least.

Be professional:
I remember when I first started Fat would always tell me to be dialed. Think about it… if you write an email that is riddled with spelling errors, and filled with slang. Chances are you will not being hearing back from that magazine. It even comes down to the names of your files. If your file is named something like, “shitty_overDP.tiff” this makes it hard for the editors to find your randomly named file when it comes to deadline time. Just play it safe and use your last name like,”denham01.tiff”. This is easier to find and less confusing in the long run.

Ask Questions:
Just ask a lot of calculated questions. If you get rejected, ask what you could do better. 95% of the time I get a lengthy response if I ask politely. It never hurts to ask, especially if you are learning.

What do you think? Cancel reply